With a tip at one end of the metal shaft and a plastic handle at the other, a screwdriver is one of the earthiest, most commonly used tools with a stereotyped shape in the minds of the public. Strelka's brand-new ToolBook is designed to give that stereotype a makeover.

The ToolBook is a screwdriver set consisting of four screwdrivers and several hex keys, with lots of features to set itself apart from its competitors. Unlike conventional products, ToolBook's screwdrivers are made completely of metal to create a silver-toned, premium image for added value. Adding to the tool's charm is its unique, streamlined shape with a “skinny” shaft seamlessly integrated into a well-rounded, easy-to-grip handle. 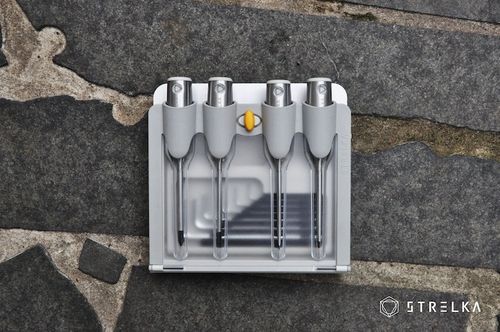 Strelka’s Tool Book
This stereotype-subverting design, derived mainly from the carpentry tools of the 18th century, is aimed at impressing users with not just the outstanding craftsmanship that Strelka uses to materialize its innovative ideas, but also its unremitting commitment to giving new life to everything in people's lives.

To address growing concerns about saving space, the tool set has a foldable book-shaped case that can be easily stored on a shelf, beneath a coffee table, or anywhere else in the house. This makes the ToolBook much more than just a tool set for DIY users. 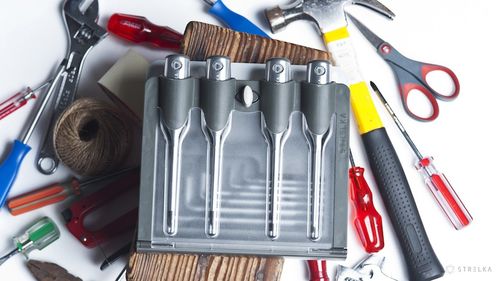 Adding to the tool’s charm is its unique, streamlined shape with a “skinny” shaft seamlessly integrated into a well-rounded, easy-to-grip handle.
Strelka, which means “little arrows” in Russian, is the name of one of the first Russian "space dogs" of the 1960s, which were sent into space on Sputnik 5 and returned safely to set an important milestone for the Soviets during the space race. The spirit of adventure is the essence of Strelka, which was founded as a brand by two young and ambitious designers from Taiwan and Canada.